And so the tradition continues.

There’s just something about these two. Eric and Pierre. It’s been my experience that when you share adventures and escapades with someone, then deeper bonds form than if it were a more casual relationship. So we are bound by our love for Africa and also for one another. Our lives intertwined almost immediately when we turned up for our volunteer experience as teachers in Namibia in 2003.

2019 and dozens of trips back and forth to Africa, we are still close mates. And we try to get together once a year now that we  have all moved on to the next phases of our journeys.

Eric turned up Friday night and we picked up where we left off when we last saw one another in NYC, around 18 months ago. We picked Pierre up at the airport Saturday at 11:00 and set out for Wooster, via the BMW motorcycle dealership in Aurora. Eric has some interest in a BMW bike. He made the mistake of riding my machine, and so he had had a sip of the elegant magnificence of German engineering.  So at the dealership, I was encouraging him to make the impulsive buy to satisfy that desire, while Pierre encouraged the more thoughtful and responsible approach of thinking it through. A devil on one shoulder and an angel on the other. Pierre is a natural born angel. I’m battling a life-long tendency in the opposite direction.

On the drive down and back we recounted the adventures and mishaps and near mishaps of Namibia and Africa. Namibia, of course, but also South Africa, Tanzania, and Zambia and Uganda. I heard some new stories about Pierre’s time up north.

Seems he was once in a car with a friend and some other guys, in the middle of the night, driving between Oshikuku and Oshakati, when a fight emerged between his friend and one of the other guys. They had been drinking in Oshakati, and so, well, sometimes these disagreements escalate when alcohol is involved. So the car is stopped and the one guy pulls out a knife and Pierre’s friend immediately disappears into the bush. The guy with the knife then proceeds to stab the car 3 times in 3 of the 4 tires. Probably not something anyone anticipated. So they are now stranded on a quiet road in the dark with a knife-wielding stranger. But the knife guy then goes into the bush, presumably to finish the fight with Pierre’s friend. Pierre and the other guy take the long walk back to Oshakati. Finally Pierre’s friend turns up and also the knife guy and they eventually convince the police of the truth of the situation. But, only after they take a taxi back to the car and carry the 3 stabbed tires into the police station so they can examine the evidence.

Police work in Namibia is arcane. And often truly hilarious, as we had a few opportunities to witness.

Anyway, we told and re-told many stories of those crazy times back in the day. Namibia was wilder then; less developed and still dealing with its identity as the world’s newest independent democracy. The day Eric and I got chased out of a bar by a huge drunk. My bakkie getting stolen while we were watching the final of the rugby world cup at the bar at The Cardboard Box hostel.

Eric and I’s camping trip and drive through the Ugab riverbed to search for the desert elephants. Eric wound up with heatstroke and we camped in a parking lot in Uis behind the falling down shack of an old mining bar. Eric slept off his desert madness while I bellied up to the bar with an old miner and a toothless old prostitute whose best days were  behind her and whose fortunes had gone the way of the shuttered mine.

Our grand cross-country road trip from Swakopmund to Cape Town, stopping to camp on the wild southern ocean beach along the way. My friend’s tug-of-war with her purse with a baboon at Cape Point. The 24-hour drive from Swakop, through Himba country to Epupa Falls where we camped on a magnificent hilltop overlooking the falls and Angola. Eric fell out of the back of the bakkie on that trip. Our camping trip up along the Skeleton Coast–driving until the road ended and nothing but sand as far as you could see in any direction.

The time the rear axle on my bakkie broke on the highway between Karibi and Okahandja and we skidded sideways down the highway for a few hundred yards before coming to a screeching and startling stop on the side of the road. And then watching as the white hot axle started a fire that we fought out on both sides of the highway–beating out the last flames with our shirts just as the fire department showed up after 45 minutes in an ancient old pumper. The baboons watched us fighting the fires from high up on a ridge.

So we told the stories. Some old and some new.

We got to see part of Pierre’s Harvard ceremony and Eric and I quizzed him about his plans now that he has closed out the chapter of academic pursuit. Pierre’s story is inspiring and makes me wonder at what I might have done if I had been more focused and serious as a younger man.

I had assumed Pierre and family would be headed back to Uganda, but they are planning at least the next two years to stay in Boston. Pierre has accepted a two-year teaching position at Brown University.

We had a very nice lunch at Broken Rocks in Wooster with Bill and Cheryl; two of the world’s coolest people. Eric’s parent’s–who have managed to raise a gaggle of the nicest young men anyone could ever hope to meet. We were ordering a beer with lunch. Bill had ordered a Yuengling lager; when I told him the owner was a major contributor to Trump’s election campaign, he immediately changed his order to a more sensible choice. Like I said, very cool people.

After, we drove back to Cleveland and went to the beach to see the sandcastle contest and swim a bit. When we were getting a beer at the beach bar, an older black gentleman called me over and asked me if I was a lawyer. I told him I was not. He then pointed to his daughter and said she was needing a husband. We had a laugh and then a few minutes later, when I was walking back by, he made a gesture of putting a ring on a finger and again pointed at his daughter. Good to know I have that option out there if necessary. Still not sure if not being a lawyer was a minus or a plus.

Saturday night we went back to The Standard and had another great meal. We went for small plates and shared; escargot, tuna tartar, truffle pomme frites, ceviche, and scallops. Pierre was happy because he got to speak French with the chef and his brother who are both from Morrocco. A good night. We met lots of lovely people and basked in the love of good friends whose paths were meant to cross all those years ago.

Sunday, we were joined at my home by some colleagues from work and a few other friends. Another superb, relaxing day; good food and a few drinks. Sukanti, Pete, and my little bestie Soni made the trip from Columbus. Lynn, my dear friend and fellow martini aficionado came.

Monday, we all went our separate ways, but are already looking foward to BRT 2020.

These pictures are all from the weekend, except the  one from Epupa Falls–which is near where we camped on that Epic road trip and one of Pierre and I on the Skeleton Coast trip. The feature picture is taken from the same area of the photo I used for the cover of my book. 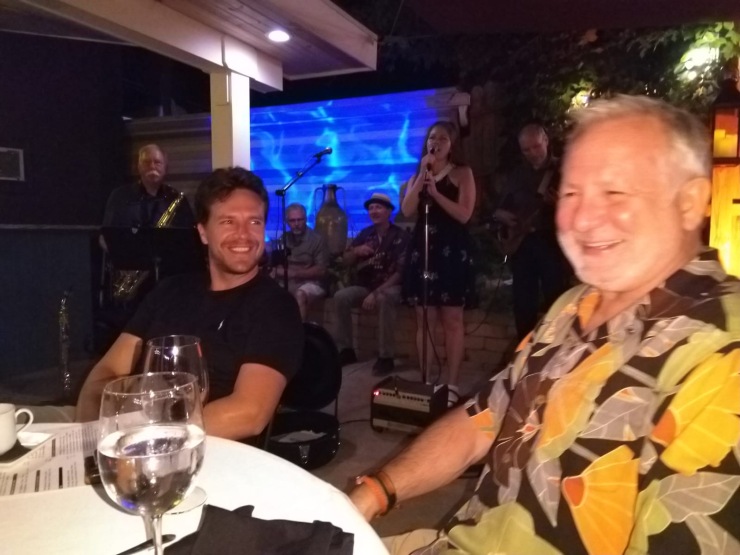 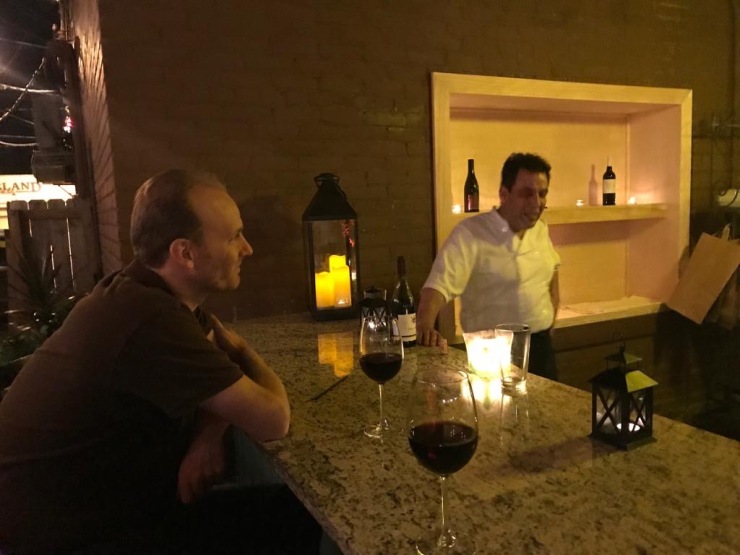 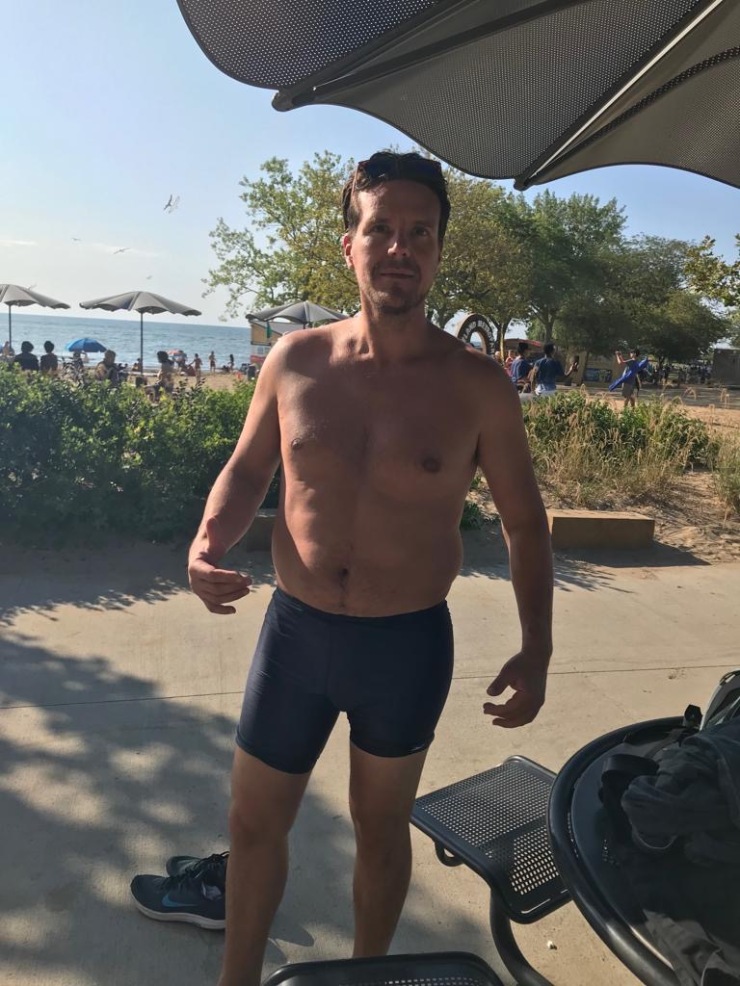 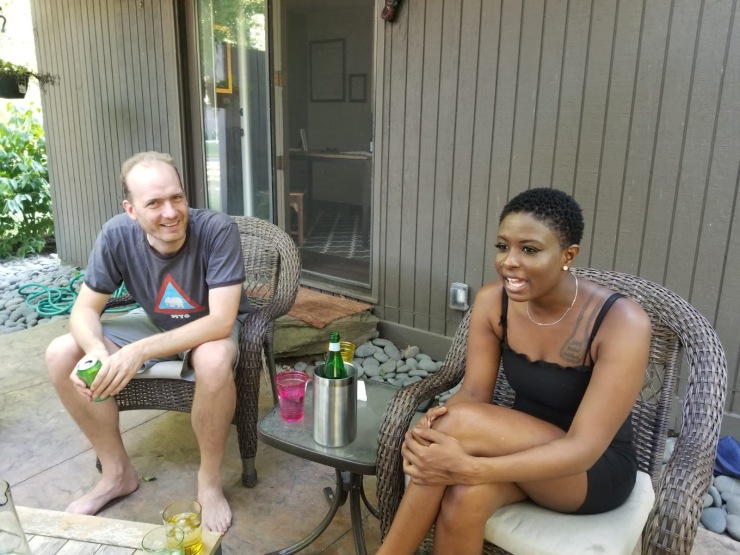 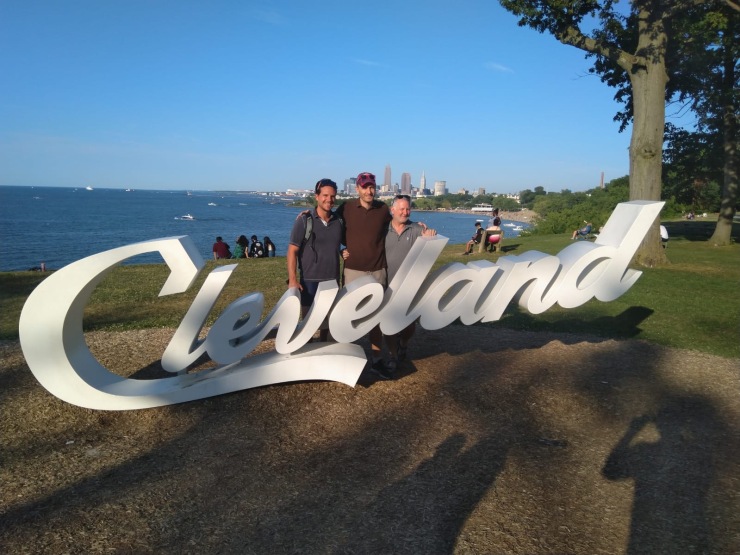 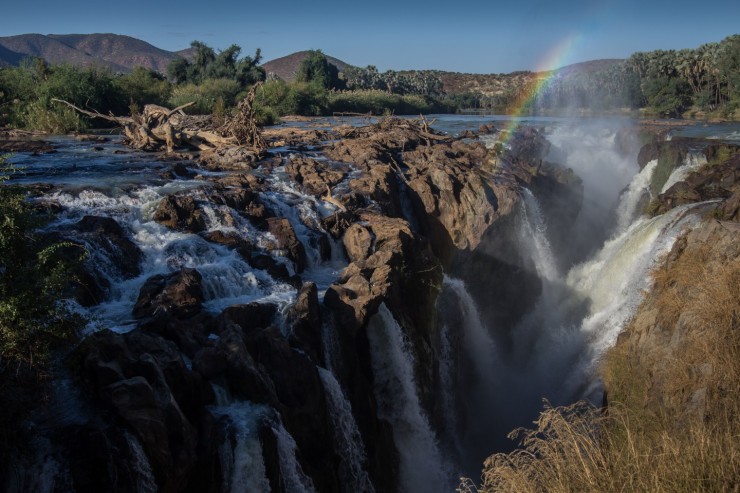 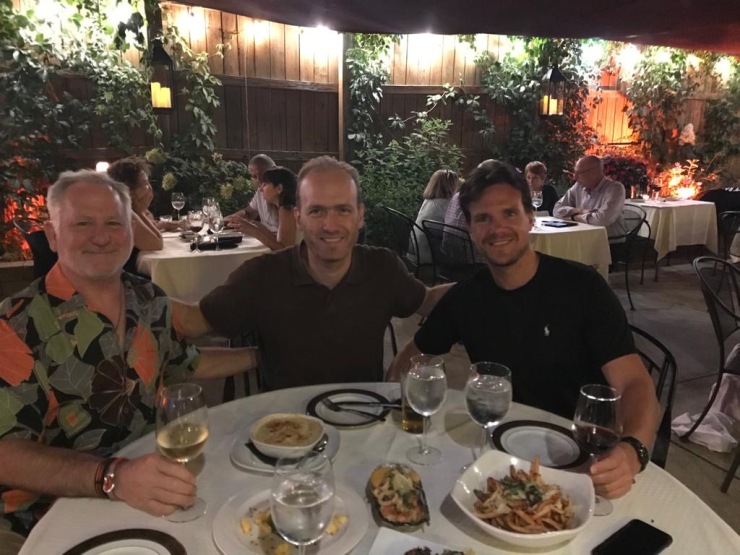 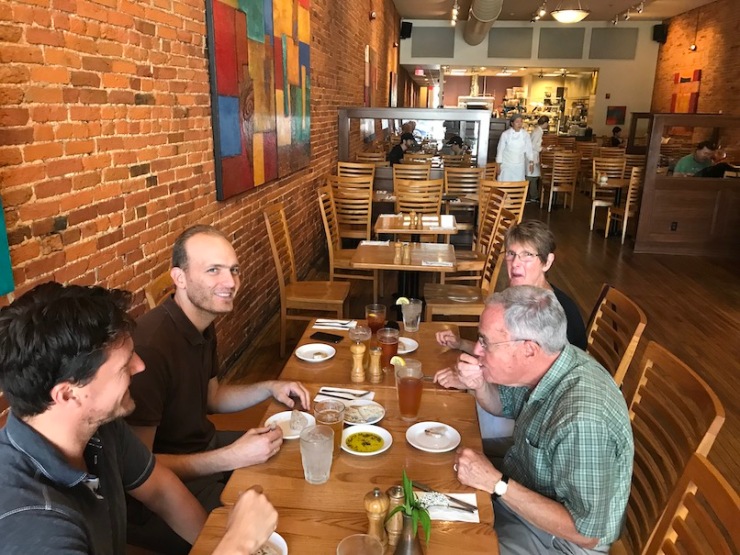 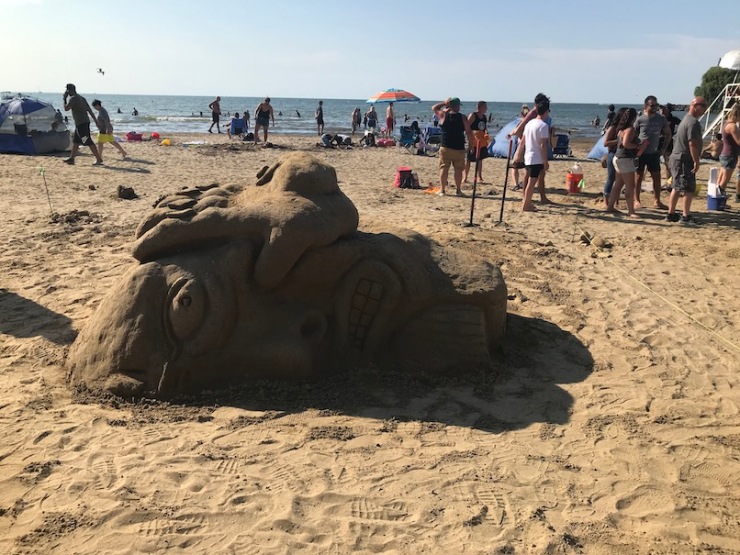 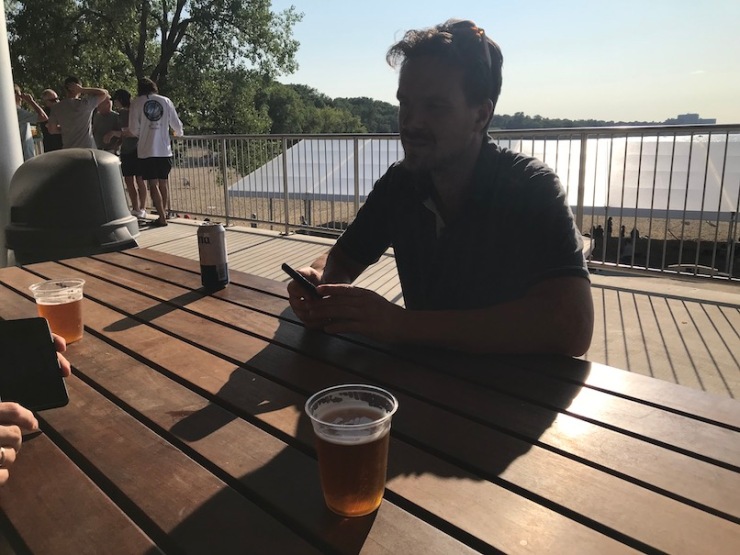 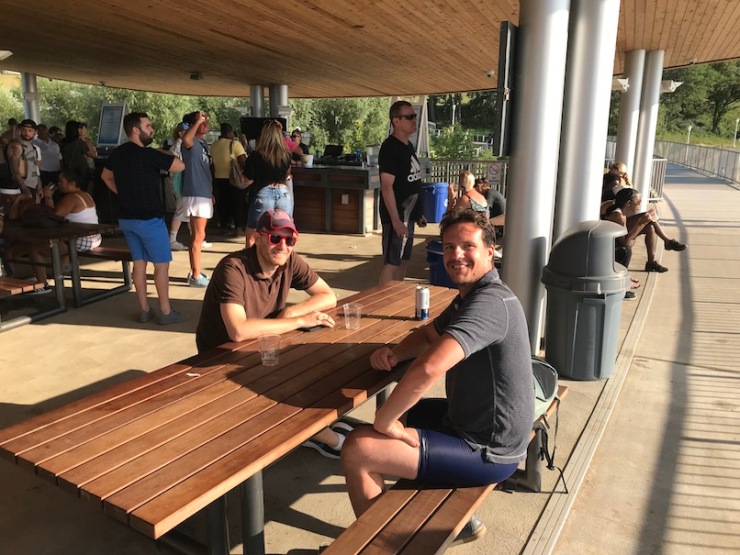 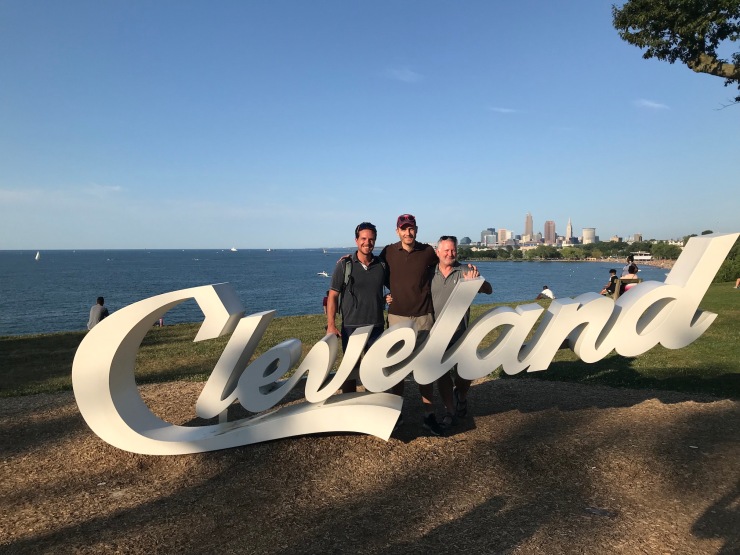