Government shutdown continues. Political craziness ensues. If only HST has survived to see this—I wonder what he would be saying. He might be praying to the ghost of the Big Dick Nixon at this point. No one thought we would live to see the day when Richard Nixon was considered an honest president; comparatively.

On the other hand, we have at least some fresh new faces in Congress. Chief among them is Alexandria Ocasio-Cortez (AOC). There are a few sassy cool-ass chicks getting into gov which is refreshing and hopeful. And the contrast is stark between them and the stodgy old white men (and often women) repeating the same bullshit we’ve been told for ages and which defines the two parties. Regarding Trump, I have some friends and acquaintances who like to say ‘well I don’t agree with his style or the way he operates, but I agree with his policy’ or shit like that. I usually punch them in the nose at that point, but sometimes I wrestle them to the ground and twist their arm until they take it back. Old school political discourse.

More than half-the people I meet who live in Midwest farm country are, politically speaking, dumb as chickens. Sort of breaks my heart to see people, armed with the power to vote, who have no world-awareness or sensitivity to the plight of others. How can people who understand (and mostly embrace and act on) the premise that treating your neighbors with generosity and respect is an important human trait, not realize that everyone is their neighbor. For many of them, the neighbor parts ends at the county line, or even more curtly, with the color of your skin.

And when did ignorance get so widely embraced? Is it ironic that at a time when we have never had so much information easily available and at our fingertips, people are less informed than ever?

I’ve noticed another trait. Some of the Trumpers are now coming back with sayings like ‘well, all politicians are the same’, or ‘both parties act the same way’. Which is also bullshit. Sure, some Dems are a little more dogmatic than others, but the Republicans are clearly a take no prisoners sort of mentality even while the hapless Dems continue to try to work together. I am not a democrat, but I am definitely more supportive of their policies, and I also acknowledge that they are far more willing to work across the aisle for the good of progress than the Republicans.

I spent Thursday and Friday in Cleveland with Lisa and then we drove Saturday to Cincinnati to hang out with Larry, Melissa, Martin and Pam. Good time. Of course. Drinks, food, music and cards. Lots of road time this weekend though.

Had my 3rd interview at the Cleveland Clinic last week and so soon should know if I am getting an offer there or not. Sort of hoping it comes through, although I would not look forward to another move. I have moved more than 10 families in my time and tired of the boxing and unboxing and all that shit. But will see what happens.

We met Ed and Rita at Olive Garden yesterday and did the dog swap. So Mandela is back where she belongs. The old girl is getting up there. I hate to admit it, but she is losing a step or two. As I suppose I am.

I made two chicken pot pies and a big bowl of curried lentils last night. The lentils will be for lunches this week and I had one of the pot pies for dinner. The other one will go in the freezer for another day. Still fighting this damn cold or sinus infection or whatever the hell it is. It’s holding me back from training for the Flying Pig.

It was very cold this morning. Mid-teens. Dela and I had our traditional early morning patrol around the neighborhood. No sign of the wolves. Now NPR, Washington Post, coffee, cereal in front of the fireplace.

No other news of note. Off to the salt mine. 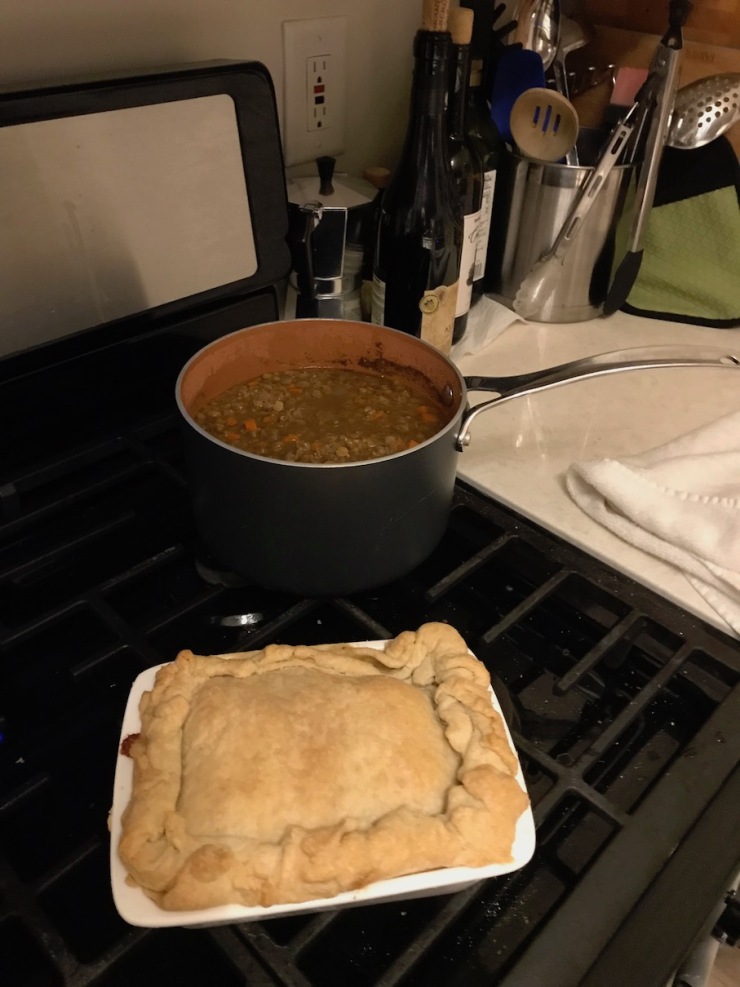