Finally, I slept. Straight through from around midnight until 10:30 in the morning. I honestly don’t know if I have slept past 10:00am since before high school. But it was delicious. When I woke, the sun was shining hard against the shutters. I wandered outside and the world was an intense bleached white.

It was an odd day in some ways. We are finding our footing as a group. This morning, one group headed out to Ravello—having read of its charms while me and a few others were destined to go to the sea at Amalfi. I was feeling a little closed in so headed out with the Ravello group, leaving a couple behind to meet up later in the town. But there was confusion as one set of keys to the house were missing and there appeared to be some indifference in the group anxious to get to Ravello. I mentioned that perhaps we could leave the house unlocked and that was met with skepticism, but that frustrated me because it seemed then that it was upon us to find the missing keys or else be locked out. So off we all go. I wandered the town a bit. Had a nice espresso and swam a bit off the public pier and then laid on a flat rock, bleached white by the sun to dry and gaze at the boats and swimmers and beach-side restaurants. Eventually I was joined by Laetitia and Carla and found that we were in fact locked from the house and now were dependent on the return of the others—which made me want even more to go home and relax. Finally we were informed our travelers would be passing through town and agreed to take home some wine and vegetables we had purchased. I had decided to walk back up the million or so steps up the steep hillside and Laetitia joined me when it turned out there was not room in the car. So up we walked—and it was good; hard, honest work but good exercise and amazing views at every turn. When we got the house, amazingly, we were locked out even from the front gate. Our group had returned and somehow arrived at a conclusion that it must take at least 3 hours to cover the 1.1 km’s from the sea to our front gate—when in fact we arrived behind them by only a few minutes. So I jumped the fence and we joined our people.

It was clear it was an odd day and we divided and moved to different quarters. Some were cooking, some listening to music and others reading and chatting. A divide had grown and while we all knew it was temporary and silly, it was our barrier and we respected the boundaries while everyone got over it. But eventually, some emissaries were dispatched to gauge receptiveness; anyone want a glass of prossecco? How about some white wine?; Did you have a good lunch today? How was your drive? What is that smell coming from the kitchen? Garlic? My god it smells amazing. Suddenly, as if they were never there, the boundaries are down and all is forgotten. The subject of keys quietly comes up before bed and we agree it makes sense to leave a set just beyond the gate—hidden under a rock or behind a shrub so we can all get in the house.

We had a beautiful meal of pasta, salad, veggies, chocolate and fruit and cheese and lots of wine and after some whiskey and all was forgotten and we are again best of friends.

I have visited this region 4 times over the past 35 years. Returning time after time because it seems to speak to me. Perhaps I’ve lived out other lives in the area. It’s true that my last trip, just a few years ago, precipitated a divorce, or at least illuminated the fatal flaws in our marriage, but I cannot blame that on Amalfi.

In spite of my experience here, I find that as a guide my suggestions are largely accepted with indifference. Sjoerd, the European, can suggest a long, hot bumpy ride over winding mountain roads to a plain village that is like 1,000 other small Italian villages with a church, a square and a Gelateria. And his car is full before his coffee is finished. I can offer a trip to a beautiful sea-sided, shaded terrace where the Pope himself is tending bar, and I find I need seats only for 1. It’s just the case the Americans are a sucker for an accent and American women especially so. It’s not jealousy that motivates these words, for I am confident in my skills as a guide, but curiosity.

I’ve decided to accompany my sisters to Rome tomorrow. The logistics are terrible to try to get to Rome and back in a single day from Amalfi and so for some reason I feel my being there may help somehow. Mostly it is the thought that they may get back to Napoli too late to catch the last bus over the mountain and in that case they would be stuck for a night. Napoli is a great city in its way, but very different than Sorrento or Amalfi or Positano. It is a working city complete with a bustling port scene. It is less kind to tourists and while the sailor in me is drawn to it, I am not sure my sisters would share that enthusiasm if they were forced to find accommodation unexpectedly.

So now sitting in Rome. We left the house at 7:15 and drove the northern route over the mountain to Napoli Central station, found the car park and caught the train for Rome after coffee and a panini. Terry and Shannon already had tickets for the Vatican tour, but we were still asked 1,110 times if we needed tickets and to ’skip the line’. They are now on the tour and I just finished a terrific pizza sitting in the shade. Now having an espresso and trying to catch up on a bit of writing and reading.

Just the one photo here from my excellent lunch in Rome while the girls were at Vatican. The rest of the photos are in Meandering section. 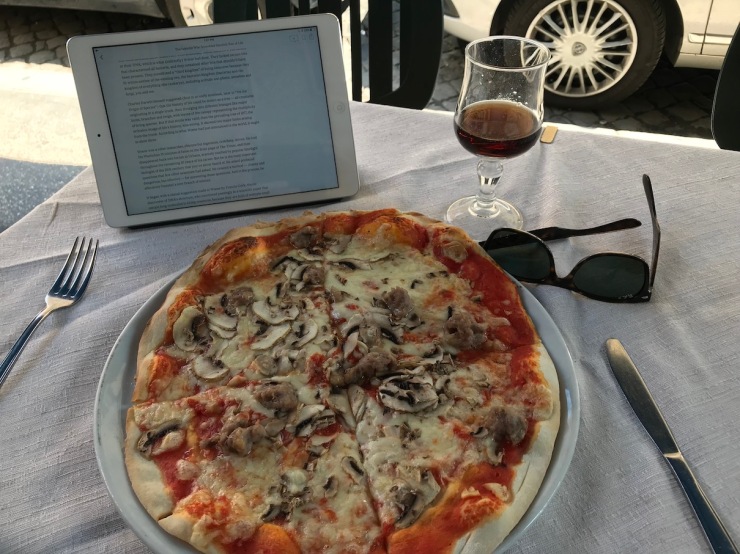