As I sometimes do, I got a crazy idea soon after I came back to Ohio. I decided to build my own camp trailer.

I am not a handy guy. The only instruction I received in carpentry was 40 years ago and from a guy who is also not a handy guy. But I am persistent on these things. So I made some sketches and went and bought a utility trailer and some wood and about $2,000 worth of tools.

I built a mock-up myself first, which was fine. It was essentially just the exterior to prove out the shape and basic design. I was working from a loose set of requirements that included: lightweight (under 1,600 lbs unloaded), big outdoor kitchen area, slide out for cook stove, and flat roof where a tent would be mounted on top and accessed via a ladder. I bought marine grade plywood for the exterior and it was covered with epoxy for additional moisture protection. The top was covered with a thin sheet of aluminum. The whole thing was mounted onto a 5′ x 10′ utility trailer.

I knew I would need some help for the more tricky bits like the drawers and interior infrastructure so I transported the early mock-up and materials to Somerset to Shannon’s garage. I hired a guy named Rick who showed up once and did not show up 7 times. A true-blue, hard-core limp dick. Decent carpenter but completely unreliable. Then came Willy. Same thing. Willy would turn up as scheduled on a Friday afternoon, and promise to be back Saturday morning and not show up again for two weeks. After losing around 3 months with those two LD’s I moved the operation back to my garage and found a local guy who was more reliable. Not completely reliable; it still took us another 3 months to finish, working evenings after work and weekends, but we finally got her mostly finished up by late July.

I grade the effort a solid B. The unit came out largely as designed. And it works largely as designed. It will never be mistaken for a professionally crafted camper, but it’s not bad for a dis-jointed prototype unit with no proper plans and built by amateurs. The tarp system I designed was completely unusable so I went for a square fold-up portable unit.

My shake-down cruise was a weekend to Hocking Hills with just me and the dog and she performed well. Next, Mom and Dad and I took off for a week to upstate New York to visit Seneca Lake and Watkins Glen. They took their RV and we had a great time.

I am now planning some major modifications to the unit. I need it to be lighter and easier to handle. So that will start in the next week or two. More photos to follow when the mods are done. If the next version performs well, I plan to build another from scratch next winter and I will do that one myself with some updated designs including a lighter all aluminum trailer. 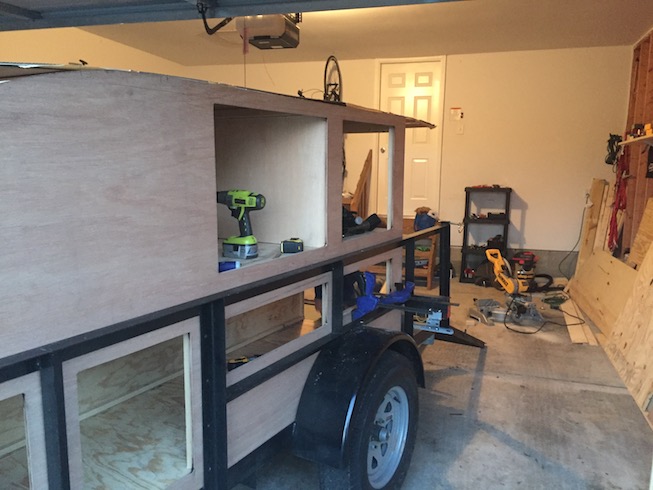 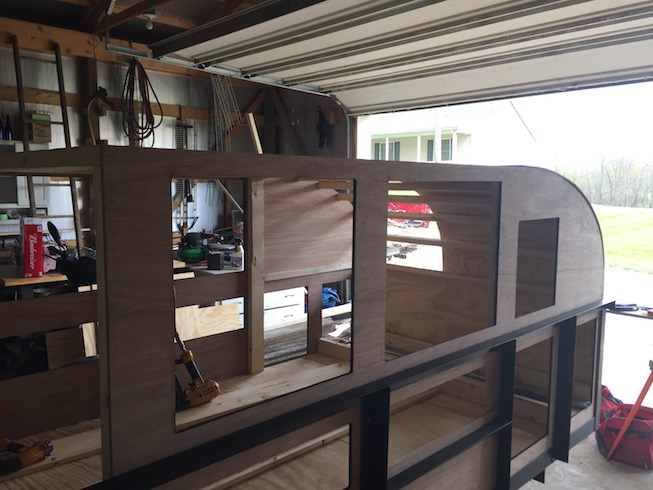