“Paulina may well be the most amazing young woman in the world. She is smart, creative, compassionate and beautiful in form and spirit. And this. While she bravely fights an aggressive form of brain cancer, she is re-decorating the cancer ward at the treatment center because she finds it too depressing. She volunteers helping other young children with their lessons in her spare time.”

I wrote these words a week ago, as an opening paragraph to a story commemorating the 10-year anniversary of Mondesa Youth Opportunities (MYO), a charity I founded that’s focused on helping impoverished youth a world way in Namibia, Africa. But then I received the news that Paulina had passed away; in the end, the cancer was too much for her. Just a few days ago, we were trading emails about details of her volunteering at MYO. She was not able to start university this year with her classmates due to her treatments and so she wanted to spend her time helping out with MYO.

So this article, meant to be a celebration of our success, must also now acknowledge that one of our best and brightest and most hopeful young graduates has left us. Paulina’s real name was Jayline Loviska Shikongo. She was 18. She was perfect. The last time I saw her was two years ago when my wife and I visited MYO. Her house was the first place we went when we arrived in Mondesa in the southern African nation of Namibia. When we walked up to their humble little house, Paulina came sprinting out of the house and leapt into my arms. It was an amazing moment. In that instant, I had absolute clarity about the nature of the relationships that I had formed with these children and young adults. I realized, perhaps for the first time, that as they grew they had come to understand the larger vision of what MYO was meant to be. And that they had a very real appreciation for the opportunities that were beginning to open up for them due to their participation in MYO. And this understanding had translated into gratefulness; and more importantly, friendship. It was never clear to me if the kids fully understood my role in MYO, but with the intensity and pure joy of that long hug from Paulina, I knew that she understood.

In the early years of MYO, I flew back three times each year and actively managed all aspects of the program, so I got to know this class of MYO students very well. Many of them are now in university; a reality that would have been almost impossible to imagine 10 years ago when they were in 4th grade. Two weeks ago I visited Chief, one of Paulina’s classmates, in Fort Pierce, Florida. Chief was awarded a scholarship to attend flight training to become a commercial airline pilot. It has always been his dream and he persisted against great odds to get accepted into the program. 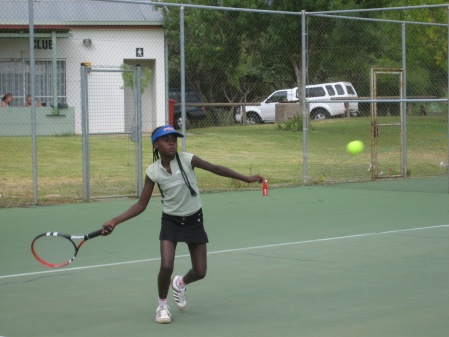 MYO is celebrating its 10-year anniversary in 2014. We have been somewhat reluctant to announce ourselves too loudly in the past. Mindful of the wisdom of humility—and more mindful of the fate of those who indulge in self-promotion. And in the world of community-based charities, where high profile launches are often followed by tales of corruption or incompetence and eventual quiet dissolution, MYO is stronger than ever. MYO was founded on several key principles. First, that the most effective mechanism to combat poverty is an excellent basic education. Next, that a good education has an inverse correlation with multiple social issues including alcohol and drug abuse, and domestic violence; people with a sound basic education thus become better parents, are more employable and more engaged with their community. Finally, MYO was founded on the simple premise that the best way to enrich the quality of education in poorly performing school systems is to provide additional training or educational enrichment.

Since 2004, MYO has provided Math, English, Life Skills, Computer Skills, and Reading Comprehension to selected students from impoverished schools in Mondesa. Over the years, we have slightly evolved our model, but have remained remarkably true to the original vision. We also provide music and chess lessons and facilitate multiple intra-mural sports. The schools in Namibia are severely under-funded and fare poorly relative to private schools or schools in developed nations. Our children come to MYO each day after attending their normal school. We give them a lunch (Namibian schools do not serve lunch) and then they go into their classroom rotation for the next 3 hours.

Our early years were typical for a small start-up charity. We were not taken seriously at first. We were perceived as the folly of another well-intentioned but naïve foreigner who would eventually get tired and move on. But over the years we incrementally gained acceptance. We moved from rented space to rented space and in our 5th year built our own school in the center of Mondesa. We slowly gained respect and solidified our programming. Our kids won spelling bees and science fairs, performed in music festivals and concerts and several played tennis for the Namibian National Tennis team in overseas tournaments. Most importantly, their grades improved markedly relative to their peers outside of MYO and each year an increasing amount of MYO graduates get accepted into the best high school in the region. We were fortunate to gain the attention and commitment of a retired teacher who now manages MYO and serves on our Board of Directors. We added an early learning center last year in cooperation with a partner program. We have one of the best private libraries in the region and a state of the art computer training facility. It does not seem an exaggeration to say that we are now the most focused, efficient, and successful education-based youth development program in Namibia.

Of course we have had our setbacks. We have had talented children who quit or we had to let go because of attendance or discipline issues. Recently, heartbreakingly, one of our alumni, a bright and beautiful boy in grade 10, committed suicide. His mother told us that after he graduated from MYO, and that support structure was removed, he became listless and distant. That incident has prompted a review of how we track alumni and to re-think what we can do to support our graduates when they leave us for high school.

Each year we choose 30 incoming grade 4 students out of around 500 applicants. Very often parents beg us to take their child—our reputation has become such that MYO is now largely considered a conduit to one of the best high schools in the country. The children selected for MYO, assuming they continue to meet our strict attendance and discipline requirements, will stay with us from grades 4 to grade 8. In addition to their classroom training, we also take them on field trips and make the library and computer room available to make sure they have access to all the resources necessary for a good education. MYO is not alone in trying to address poverty through education. What sets us apart is our fanatical commitment to excellence in all that we do. Our fundamental model is simple, but we execute extremely well thanks to our management and staff. We are completely transparent in finances and what we spend — 97% of all donations go to goods and services that directly support our core mission of educational enrichment.

While we are proud of our accomplishments and the success of our learners, we take nothing for granted. We remain humbled by the dignity and commitment of our students, grateful to our donors,and are proud to work in the service of the disadvantaged. And as we continue our efforts, we will do so with the memory of Paulina’s strength and beauty motivating us to strive for excellence.

Robert Myres is a technology consultant and occasional contributor to Idaho State Journal. In
addition, he is the founder of Mondesa Youth Opportunities (MYO), an education-based youth
development charity located in Namibia, Africa. MYO will celebrate its 10-year anniversary in 2014.
Myres lives with his wife in Southeast Idaho.