This post is a mishmash of thoughts and sentiments over a week’s period of home lockdown—a whirlwind of canoe building and virtual happy hours and having a few drinks while listening to John Prine. Ole John died from the virus a week ago. He was something. A legend. An American icon. I stayed up late into the night a few times this past week, listening to old clips.

I am humbled by how smart and kind some of my friends are. Truly. I had a long call with Craig, Nick and Matthew from Premier on Tuesday evening. It’s hard to overstate how much I respect and enjoy friendship from these three. Craig set up a call for us to toast my new job. A magnanimous gesture from Craig—who has a lot to do and worry about as he tries to make sure all his people are engaged and employed. Matthew and Nick are super smart and kind young men.

Wednesday was Sibling happy hour so I caught up with Shannon, Larry and Terri. That was so nice we did it again on Saturday. Thursday was a good long chat with my great friend Ashley on Zoom. Friday, was Prachi, Zach and Kristen—my old crew from the Clinic. Sunday, I caught up with Lynn, my martini pal. So, not losing much steam on happy hours even under lockdown.

On Saturday, Prachi visited for a couple of hours. We sat in the sun, appropriately distanced and chatted. She had come over to pick up an exercise bike I no longer used. It was nice to talk in person for a change.

John Prine. He took the simplest of thoughts and somehow made them relevant and important. For 50 years this guy wrote great songs. When Joan Baez sang a tribute song ‘Hello in There’, sitting on a stool in her kitchen, well, the tears just came. Tributes have been steady and touching all week. Springsteen called in to his own radio station to talk about John. This is what he said.

‘Not only was he one of our country’s great songwriters, a real national treasure. A sweet and lovely man. I was proud to call him my friend.
He wrote music with towering passion, great details of ordinary lives. His death just make me angry. He was simply one of the best we had.

John was with us a long time—my family are all big fans and we listened and sang along for decades. His songs bring memories to the surface. Times I’ve had, places I’ve been. Important people in my life.

Guess I must have spent a couple of dozen Sunday mornings at the Green household listening to Prine. Singing along, chatting with Errol and Carla and Kelly. While Beverly made biscuits and gravy with eggs.

If you were ever hanging around in the kitchen of me or any of my sibs, it’s as likely as not you’d be hearing some Prine. He was just always there. And we know all the words and so we sang along. Same with extended family. We might be 15 or 20, sitting around in Terri’s or Mom’s kitchen or someone’s garage, with a few people playing guitars and again, John Prine would come up and everyone would sing along.

John made the ordinary, and even the mundane, somehow seem okay. He gave dignity to ordinary people doing ordinary things.

I remember driving to East Fork University one summer, listening to Prine the entire way. Not sure why that memory sticks so prominently. I suppose because it was such a beautiful Idaho summer day to be driving along next to the mountain range and then finally the long slow drive up East Fork Canyon, with the window down and John and me singing out loud.

He was a postman in Chicago, after being drafted in the Army in the 60’s and he wrote ’Sam Stone’ while walking his route. He said being a postman is like ‘being in a library with no books. Once you learn your route and the dogs names, you have a lot of time to think’.

When I first moved to London, in 1999, I was recently engaged, and then very soon un-engaged to a Puerto Rican princess. I was pretty torn up. And working so fucking hard it hurt. Super long days and full on travel. And the rain in London. The constant rain and always grey skies. So heartbroken, exhausted, and living in a shower that would not turn off, I was sort of an emotional wreck. There was a little restaurant across the street from the flat I was living in and it became my second home when I was not on the road. I was listening to a lot of John at that time and the song ‘Blue Umbrella’ sort of became my life-theme for a while. And so when I hear this song, I travel back to that little restaurant in Surrey where the bartenders and servers took such good care of me.

You can’t really have a conversation about John without also acknowledging his friendship with Steve Goodman. Goodman died tragically young in 1984, in his mid-30’s. I happened, completely incidentally, to get the chance to see him in Atlantic City in 1983. I was living in Seattle but had fallen crazy in love with a beautiful woman from NYC. And so we ignorantly tried to make a cross-country relationship work; two people with no money and no life experiences to guide our decision making. But I met her one amazing weekend in Atlantic City and it happened that Steve Goodman was playing at the hotel lounge. He was short and squat and his guitar looked bigger than he was. But his voice had a crystal clarity and sincerity that made you hear. Only years later did I realize that he was as outsized as he was for his short time here.

I saw John in concert 6 or 8 times I think. I remember for sure seeing him in Cincinnati with Pilar, Columbus with mom and dad, Salt Lake City with Cheryl and Milwaukee with Nancy and her sister and niece, Rose. Rose actually designed the logo for MYO that weekend while I was visiting.

I finished the last of the amazingly good Hibiki Japanese Whiskey Ashley got me for Christmas. It was truly sublime.

Building a boat is a noble profession. It requires patience and careful craftsmanship. These are things not in abundance in my normal course of life. But I am learning.

I’ve made progress these past two weeks. And, a couple of slight mishaps. I glued the inner stems to the molds. That was a mistake, although I think I have effectively sorted that out with my sawzaw and a little on the fly engineering. I also made a choice to abandon the esthetics on the bottom planks once I realized I was too far in to correct a mistake. In honesty, I sort of took this phase casually—in terms of the esthetics. I made a choice to try to be correct with cuts and planking and not worry about colors of planks as they related to one another. I think on my 2nd canoe, I will tackle this. For this one, I will live with the slight variations as they occur. And, this, they are all on the bottom. So if someone is looking at the bottom of the canoe in the water, it means I am mostly likely drowned. If they are looking at it on land, I will headbutt them if they comment negatively on lack of color symmetry.

Other mistakes. I didn’t take as much care with the stem gluing as I might have. I didn’t take the time to number all the planks (again, in consideration of color symmetry). The book I am using as a guide, Canoecraft, suggested reading the entire book before starting off. I didn’t do that. It’s just not my nature. I am way too impatient for that shit and also I am basically an experiential learner—I like to learn by doing things and I accept there are consequences to that approach. I think if I build a second boat, I can counter these mistakes. Also, the book calls for building the strongback with 3/4” plywood. At the time I started, I had a whole garage full of 1/2” plywood and so I went with that. It seems to basically be working pretty well, but just not as sound or sturdy as I would like. But, it is fine. It’s working and no major mishaps from this viewpoint.

My hands are covered with small cuts from the brad nails and splinters–an undesirable consequence of this activity.

Chronology of canoe work over past week or so. Glued the inner and outer stems (after bending as previously discussed). Attached the stem molds. Planked the entire boat. Next I need to cut the sheer line and attach the outer molds. Both delicate little bits of work that will take time, patience, and a steady hand. Then, I must pull out all the tacking nails and then sand, sand, sand in preparation for the fiberglass and epoxy.

While progress is good, Canoecraft estimates I am now about 1/3 complete with this project. So, a ways to go still.

Been cooking some damn good meals—as people seem to be doing in this era of home lockdown. Last night salmon with polenta with corn and asiago. Homemade pizza on the BGE. Pork loin with roasted asparagus and cauliflower. Meatball lasagna with Caesar salad. Shakshuka with poached eggs. Hummus. I made a couple of baguettes with the lasagna. So kitchen time has been satisfying.

I’ve been chatting with Sjoerd every other day or so. He is a social animal and I think finding it a little difficult to be home so much of the time. Onah is a nurse and has been re-purposed to help on the front lines, so a picture of her in her medical kit. 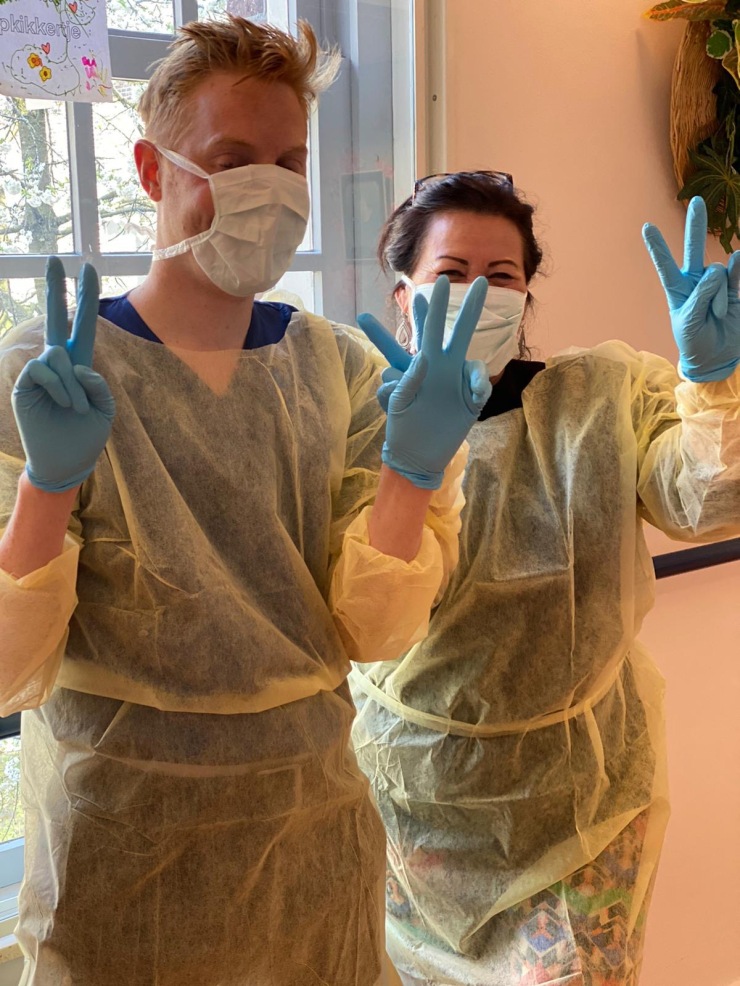 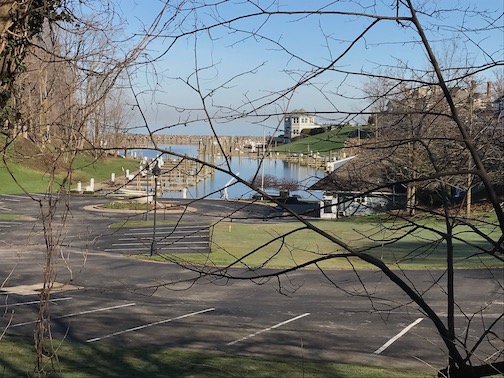 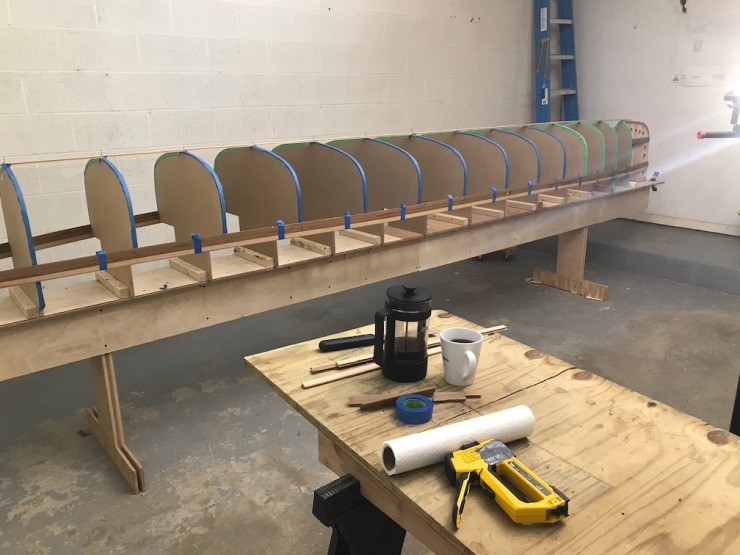 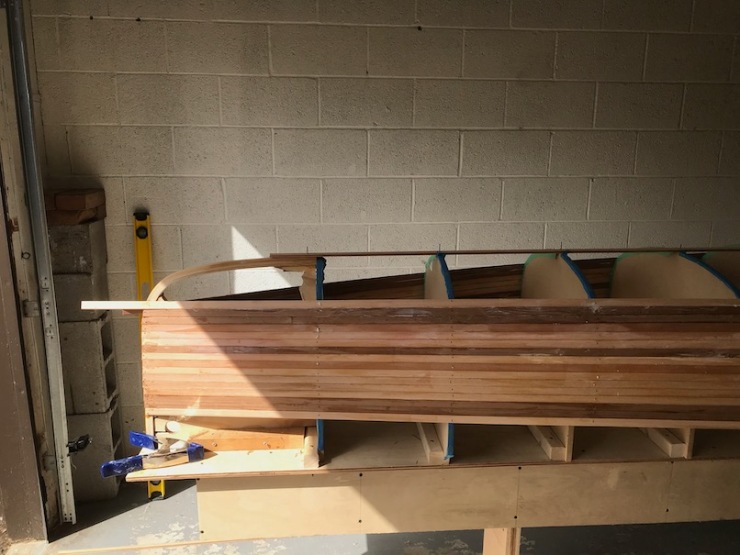 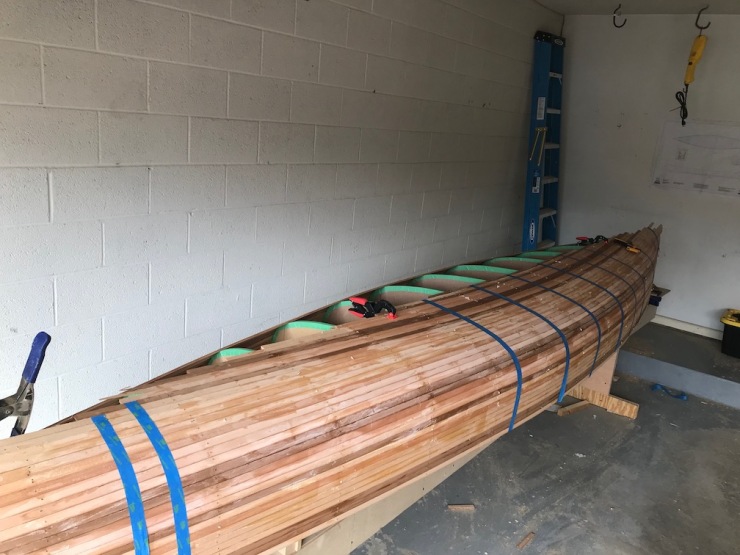