Just having my morning coffee on Thursday of week 3 of self-isolation. For me, the ritual is important. Almost as soothing as the coffee. I put the electric tea kettle on to heat the water, which takes about 5 minutes. I get the whole beans from the freezer and carefully measure 1.5 scoops into my excellent burr grinder. I grind the beans perfectly for a French press and pour them in. Then, while the water finishes heating, I stare out the kitchen window at the birds, squirrels, and occasional deer that are outside. My neighbor puts out corn and seeds and so there is always a gaggle of wild animals out there competing for easy nourishment. This morning it is clear, crisp and the sun is just coming up.

Years, ago, while living in Sydney, I took a short writing class as part of the booksellers and writers conference there. This would have been in 2005.  I dug around in my hard-drive files and found a little piece that I had to write as an assignment that required us to describe a moment in time in a current or former vocation. I wrote about my time at College Market Books & Coffee.

The day’s brew arrives at first in sip-sized wisps of flavor, floating through the shop like a hesitant mist creeping silently across a meadow. As the water begins to boil, the percolator erupts, and the acidic aroma of the raw-grind softens with the steam. The fog of flavor gathers confidence and depth; I take a moment from opening chores to absorb the scent and look out the window as the first hint of light appears over the mountains.

As the extraction nears completion, the shop is immersed in the essence of the brew. It is a Kenyan AA, roasted to a whisper past full-city. A true estate-grown Kenyan, not one of the substandard co-op blends that has surfaced with the growing popularity of Central African coffees. The essence of coffee is best expressed in its bouquet, and that is where it must first be measured. The passion of this aroma can come only from beans of excellent pedigree that have been grown and processed with care, and roasted by a master. We are ready to open only when the scent of the day’s brew assigns the ambience. Without it, we are ordinary.

When I take my first sip and the taste comes, I know It’s time to open.

I was in my 20’s when I opened The College Market. At that time, I had only dreams about traveling and living in Europe and Africa and Asia. And somehow those dreams came to my reality.

I’ve had some good philosophical conversations with Sjoerd and a few others these past days during these strange times. Generally speaking, we agree that humans are most likely not yet evolved enough for self rule. We collectively are still too greedy and easily manipulated. Many people make terrible long term decisions in favor of short term gain. I’m not speaking personally, but politically. Personally I make controversial decisions all the time; but they affect only me. Politically, I vote to support the poor bastards who are born in to less fortunate circumstances or otherwise just have a more difficult time of this experience. And, I have enough brain cells banging around to recognize that most of the nonsense our politicians put out is self serving bullshit. Shit like tax cuts for wealthy, corporate bail outs, trickle down economics and making up phantom fears to justify deadly and expensive wars on the other side of the globe every decade. Maybe we need a few thousand more years to evolve our brains and emotional maturity — but of course by then the planet will be uninhabitable.

So we’re fucked as a species I think. Best to live out this life with as much enthusiasm and zest and fun as possible, because if the buddhists are right and we have to keep coming back, it’s likely to be a lot more fucked up on this planet in the next few hundred years.

John Prine is in critical condition with Coronavirus. He is a national treasure and a family favorite. At his age, and having survived two cancers, one of them lung cancer, it seems there is a good chance he will not make it as this is a respiratory illness. I’ve seen him a bunch of times. A class act and total professional. John always bucked the trend. He toiled at his craft in relative obscurity for decades. He was a good friend of Steve Goodman and in the early days. They co-wrote ‘you never even called me by my name’ together, which David Allen Coe recorded. Good guy. Our whole family listens to him a lot.

Donald Trump continues to spread misinformation and mislead those dumb enough to believe him. Liberty University, run by Jerry Falwell Jr., a big Trump supporter, reconvened their classes last week after spring break. They are the only university in the country to bring students back to campus. Within a week they had more than a dozen confirmed cases and even more kids sick. It takes a special kind of stupid to be at that level—but we have our share of them apparently.

I have a second cousin named Pat that I only met once. He committed suicide a couple of weeks ago. He was the son of Johnny Studer—who I knew my whole life. Johnny was a few years older, but worked on the farm with Uncle Bobby and so we spent a good bit of time together. Somewhere, Johnny went off the rails and turned to smoking more weed than working or being productive. He became a pretty embittered, hard-core Trump supporter who blames the world for the problems with his life situation. I don’t understand him, but still love him.

Some years ago, maybe 10, I was at the farm house and Larry and Johnny were playing guitars. I think grandma might have still been alive since we were there, or maybe it was even the week that she got sick. In walks this tall, strikingly handsome young man. Dark hair and beard and carrying a guitar. He was a good player and singer and super nice young dude. He might have been around 23 or 24 I guess. He had just started working in the oil fields in North Dakota during the fracking boom there. This was Pat Studer.

We only got a chance to chat a little, but he struck me as a really nice and smart young man. The way he looked, and the way he carried himself, with absolute confidence, made it seem to me like he was a guy who had the world by the balls. But now he is gone by suicide. Hard to imagine what went wrong. I heard he had recently divorced, but that hardly seems reason enough. But who knows.

I’ve been catching up with some friends. Some from the old days. Some I don’t communicate with often, but we have a deep love for each other and I know they are there if I need them and they know the same.

These strange times are affecting people differently. Some social types, are suffering being in lock down. Others are not used to being with their kids or spouses or SI’s for 24 x 7 and that is troublesome for them. One of my friends seems irrationally upset and even angry about the whole thing. She has a pretty privileged life and so that is why I say irrational.

I guess at times of stress, we do start to understand who our truly good friends are, and who are just people we occasionally chat with.

The rugby community is tight. Many of us are connected through and communicate via FaceBook. We’ve been sharing stories and photos of Abel as of late. We feel bad that no one can be there at his funeral.

I’ve finished refinishing the big desk. I had bought two quarts of a reddish stain, but when I tested it on a small section, I did not like it. And the pre-stain conditioner brought out the wood tone so nicely, that I decided just to leave the color and put on 3 coats of semi-gloss poly. While I had my home office torn apart, I went ahead and threw out all the old stuff I no longer needed and upgraded my work space.

With more time at home, comes more time in the kitchen. Nothing too fancy, but just nice meals every night. I ate the last of the homemade bread so now must make another loaf.

Beautiful little Aneeka, in Namibia, sent me a picture of her corona-outfit. She said that disease is not going to get her.

No apologies for the excessive amount of pictures of Mandela in my office. 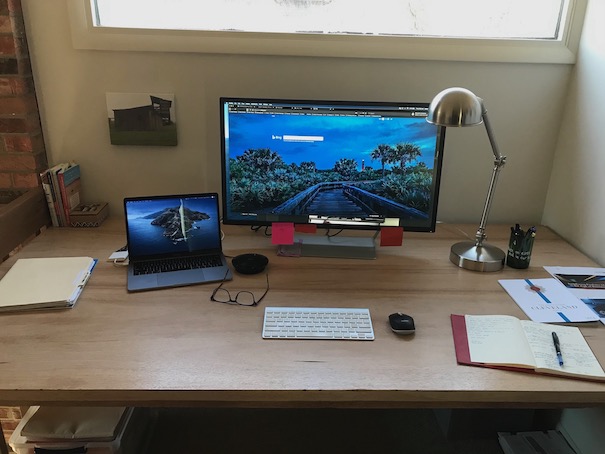 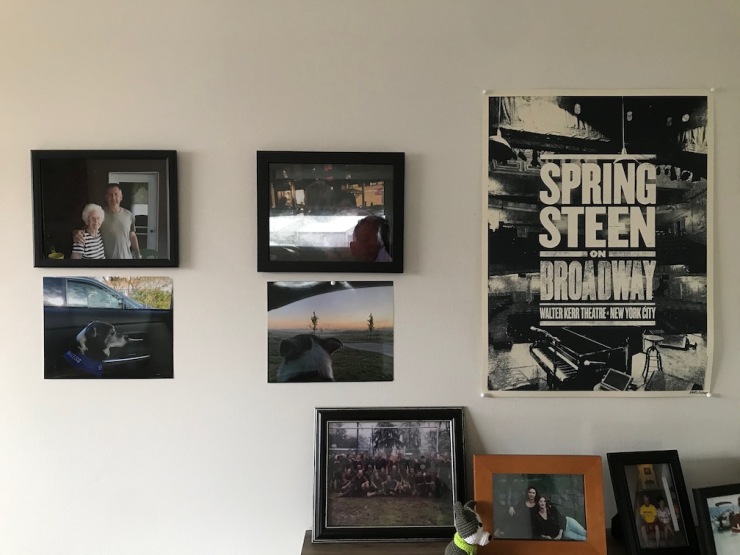 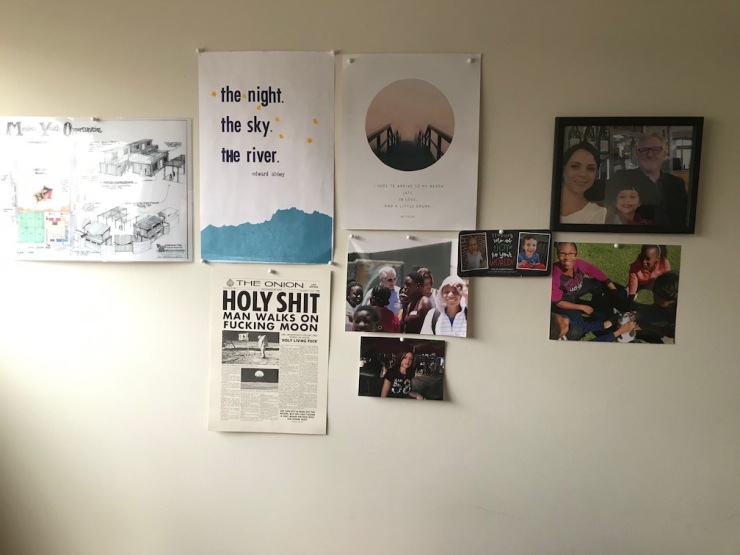 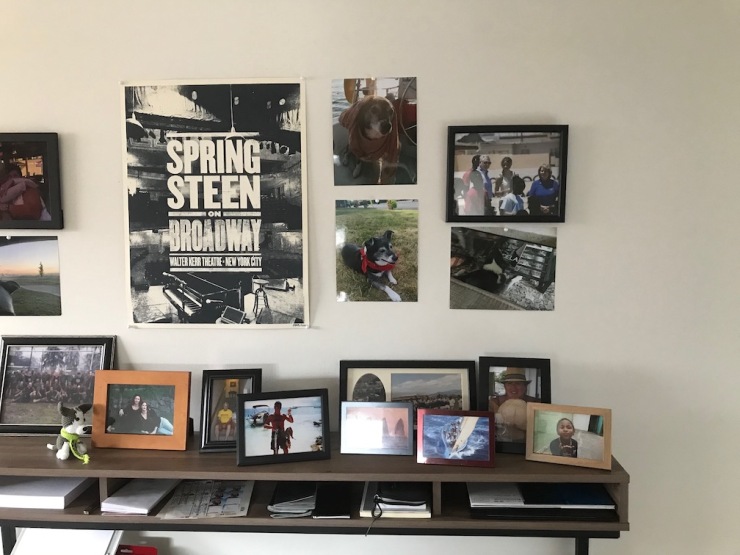 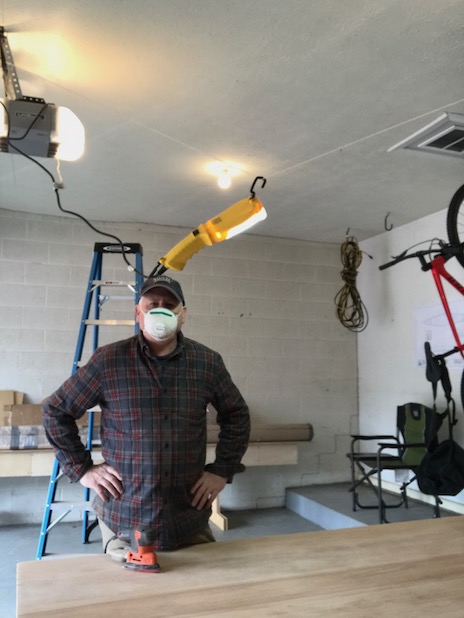 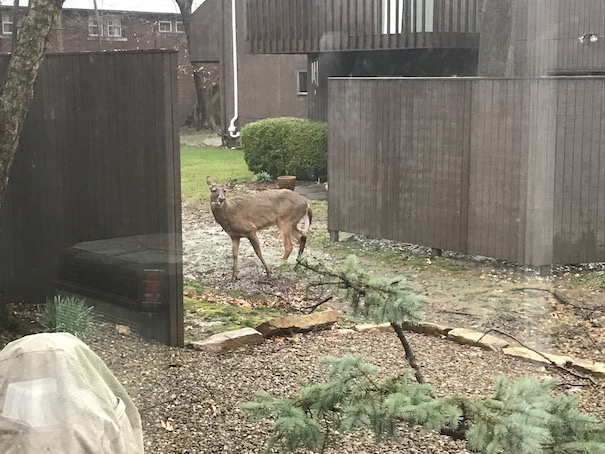