Last night I dreamed deeply about Namibia. When I think about Africa, I get nostalgic. Like most non-natives, I struggle to find words to express my affection and love for this land. There is just some deep, innate remembrance that overwhelms me. Perhaps at some cellular level, we must know this is where it all began for us. I think my current dreams must have been spurred by some emails and videos from a friend who was in Cape Town over the weekend. Cape Town Jazz Festival.

Also, I was also trying to figure a way to go to the Sports Africa conference this year, but I just don’t see how that is possible. It is in Dakar in June and I don’t think I can take a week just then with our work schedule. Also, this conference is normally further south and I can piggback the trip to the conference with a trip to MYO. But the distance is just too great. These things combined with the cost of two trips to Africa in one year, make the conference this year a non-starter. In truth, it’s never been particularly beneficial to MYO. It’s just that I’ve gotten to know some of the people and enjoy the camaraderie.

So the feature photo is from Robben Island. A beautiful place with a deeply divided past. A terrible prison, but also the place where Mandela, Sisulu, and Mbeki led the ANC movement even from within the prison. Mandela smuggled out his entire manuscript for ‘The Long Walk to Freedom‘. Essential reading for anyone interested in this story. The images of Mandela and the other freedom fighters, and the stories, are powerful.

It’s worth noting that this was unfolding while I was in high school. I distinctly remember Mr. Canterbury, my high school civics teacher, explaining to us that the US refusal to join the rest of the world in levying sanctions on South Africa was justified because Mandela was a terrorist. Meanwhile, British citizens were on TV wearing Free Mandela T-Shirts and not long later, musicians began boycotting all acts in South Africa. The US went down with the ship on that one–as usual, choosing economic interests over human rights.

Another interesting episode on the way home from work yesterday. Once again I drove past my exit. By the time I noticed, around 10 miles had gone by. GPS suggested I turn around and take the highway back on the same route I took to that spot. But that is not my way. I hate going back the way I came on a journey. And this normal trip home from work had somehow turned into a journey. So I just headed north and took the coast road. Lost 90 minutes or so. But made it home.

I’m no Freud but I think I see the subtext here with these incidents.

I’ve never thought about myself as an introvert. I consider introverts people who are somewhat socially awkward. I am not. It’s just that I choose to be alone a good bit of the time. It’s healthy for me. Or unhealthy if I do not get this time. I need the time to think and reflect. But I suppose, like everything, it’s Goldilocks. Not too much and not too little. Who knew that fairy tale was so profound.

Ironically, when I am around people, I tend to be close. To touch, to want to share space. It’s the middle ground I guess that I struggle with.

No other news of note. Below – Mandela and Walter Sisulu. Another great hero from that era; pictured here in the yard at Robben Island. Below that, the cell where Mandela spent most of his 27 years in prison. Like I said, a story worth reading. 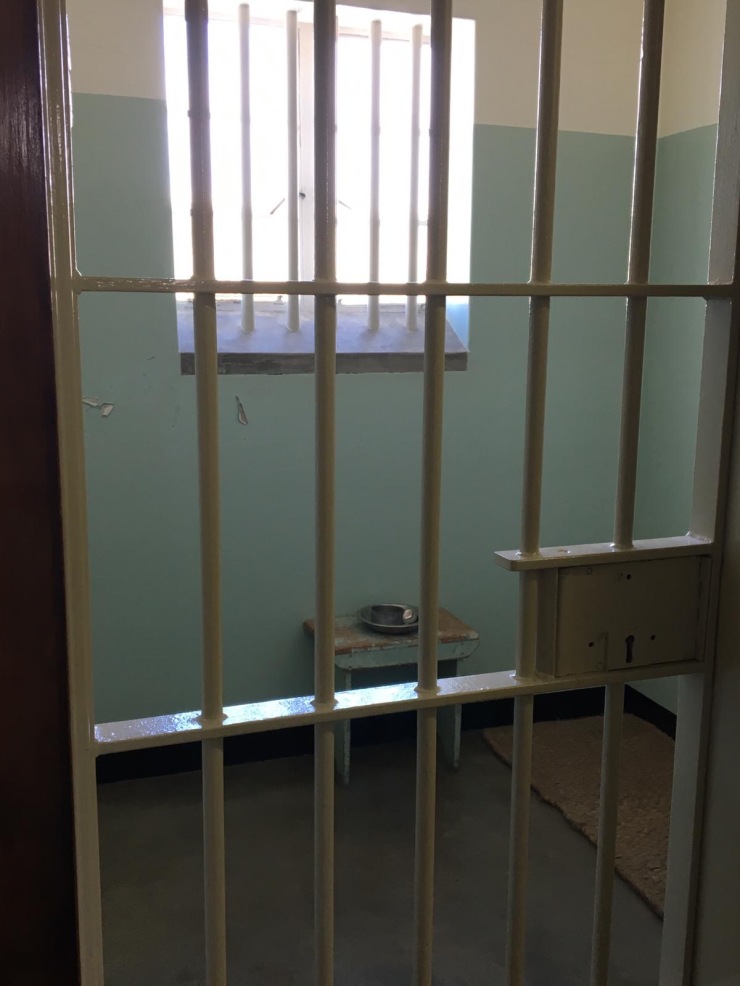